Here you can check the latest news about overseas Koreans.
Expressing support for the designation of November 22, 2022 as "Kimchi Day" (H. Res. 1245)

An event to express support for the designation of November 22, 2022 as "Kimchi Day" was held at the Library of Congress in Washington, D.C. with attendance by members of the House of Representatives on December 6. 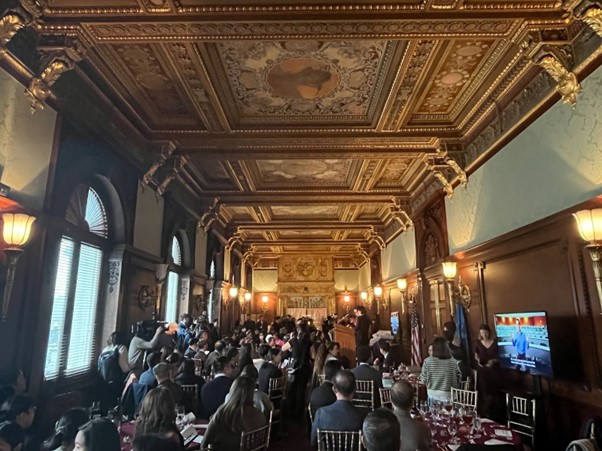 Photo: Event at the Library of Congress 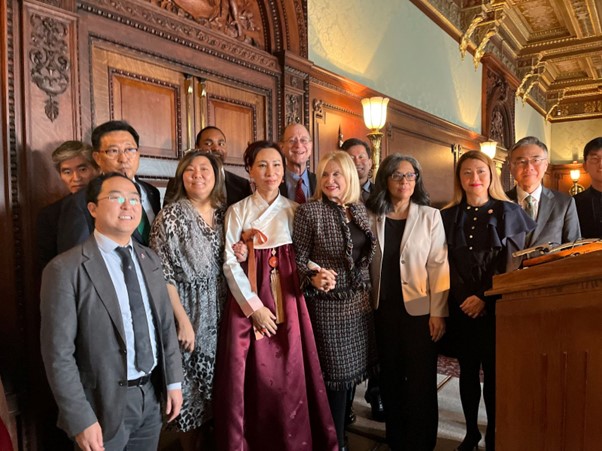 Photo: Group photo of members of the House of Representatives and event organizers

Various products related to kimchi were exhibited in the event hall before the event started, and a kimchi-making experience event was held.

Judy Chu (California), Chairperson of the Congressional Asian Pacific American Caucus, announced, “We have confirmed the popularity of kimchi that has become widely available all around the United States, and today we verified the contributions made by Korean Americans who came from Korea, the origin of kimchi.” Judy Chu made remarks to support the event.

Andy Kim came up to the stage and said, “I had to run here from my office in the Capitol after smelling kimchi, and I had never even imagined smelling kimchi in the Library of Congress.” He added, “We will do our utmost to spread the Korean food culture in the U.S. Congress.” Marilyn Strickland, widely known as a House member who wore traditional Korean hanbok during the swearing-in ceremony, showed confidence in passing the resolution by saying, “Many people asked about kimchi since my childhood, and kimchi has now become a health food product readily available in the United States.” 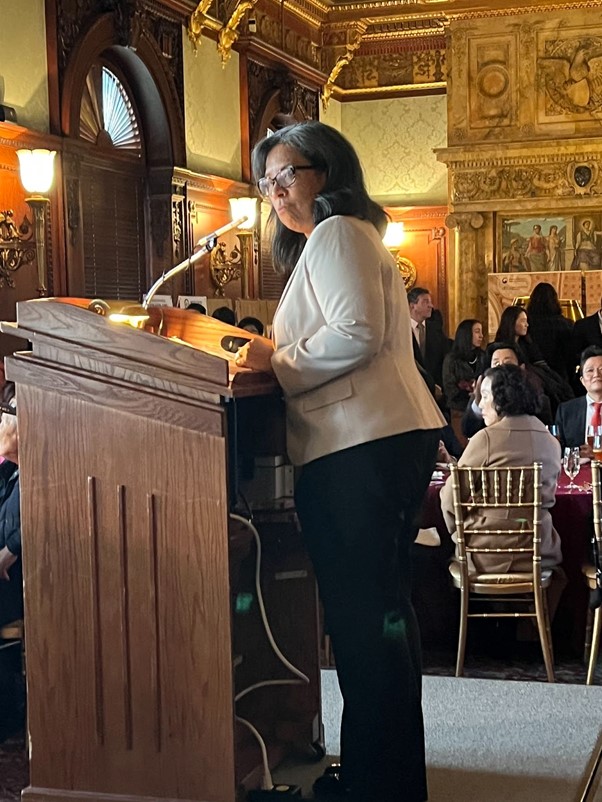 Carolyn Maloney, the first House member to propose the resolution, received a big hand from participants in the event hall by introducing the history of kimchi and kimjang, the process of making kimchi that is listed on the UNESCO Intangible Cultural Heritage of Humanity. 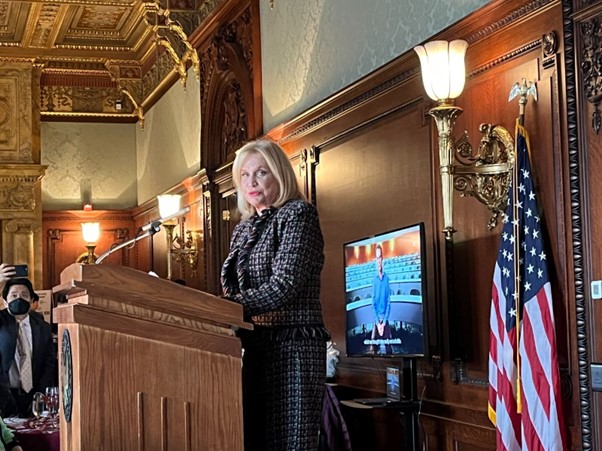 Young Kim, a House member from California, said, “Tasting our proud kimchi with fellow House members, I feel like I am back in Korea.” Kimchi Day was officially declared a legal anniversary by the South Korean government in 2020, and various states in the United States, such as California, Virginia, New York, and Washington, D.C., passed the resolution on Kimchi Day. Currently, New Jersey has also introduced a resolution and is working to pass the resolution.

Ellen Park, a New Jersey assembly member who came from New Jersey for this event, congratulated the event by saying, “Passing of the Kimchi Day resolution will be a signal for spreading the Korean culture, which is drawing ardent interest in the United States, and passing of the New Year’s resolution will be the first step to spreading the Korean culture in the mainstream American society.” In addition, about 100 overseas Koreans came a long way from New York, New Jersey, and Virginia. They spoke with one voice that this event would be a golden opportunity to celebrate Kimchi Day on the federal level. 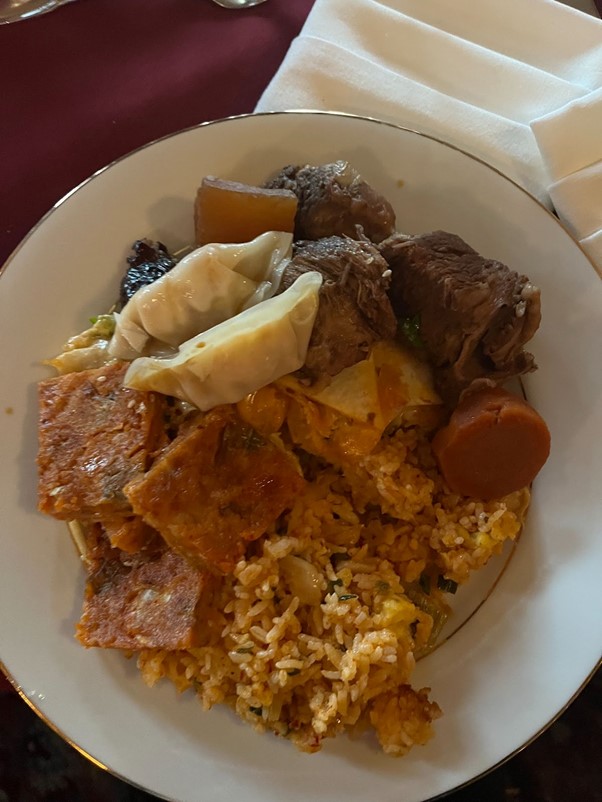 Photo: Various dishes made with kimchi

The smell of kimchi was spread throughout the library because various kimchi items made during the event were made available for participants to eat. Everyone including members of the Congress could taste food made of kimchi, such as kimchi dumplings, kimchi pancakes, kimchi spaghetti, and kimchi ribs. Press correspondents from Korea also came to this event and delivered the hot news to Korea.

Chun-jin Kim, CEO of the Korea Agro-Fisheries & Food Trade Corporation who came from Korea for this event, expressed his impressions by saying, “I am grateful to overseas Koreans for working hard to make Kimchi Day possible in faraway America, and I hope that the excellence and healthiness of Korean kimchi will be spread more widely in the United States.”

Politicians and business authorities from Korea spent time discussing the exportation of kimchi.

IN THE HOUSE OF REPRESENTATIVESJuly 21, 2022

Expressing support for the designation of November 22, 2022, as “Kimchi Day”.Whereas kimchi is a traditional dish in Korean cuisine with a long, rich history that began over two millenniums ago during the period of the Three Kingdoms of Korea;Whereas Korean Americans represent a vibrant, growing community in the United States whose predecessors first arrived in America over a century ago, and whose members have gone on to become an indispensable part of the fabric of America and have made numerous contributions to science, law, business, art, and many other fields;Whereas, in 2013, the United Nations Educational, Scientific and Cultural Organization officially recognized the Korean traditional process of preparing kimchi, “Kimjang”, on its Representative List of the Intangible Cultural Heritage of Humanity;Whereas kimchi has been widely acknowledged as a probiotic food item with well-established positive health benefits, serving as an excellent source of beta-carotene, calcium, potassium, dietary fiber, and vitamins A, B, C, and K, which can lower rates of heart disease, cancer, stroke, and diabetes;Whereas the growing interest and popularity of kimchi as a dish in the United States, as evidenced by an increase in available kimchi-related food products, restaurant menu items, and interest from non-Korean consumers, represents a positive example of multicultural exchange; andWhereas kimchi is celebrated in Korea, the land of its origin, each year through the designation of November 22 as “Kimchi Day”: Now, therefore, be itResolved, That the House of Representatives supports the designation of “Kimchi Day”.